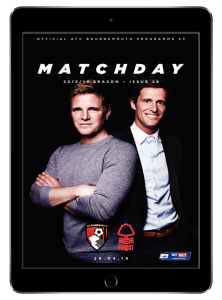 Following the announcement by the club the news has been very well received by fans. One AFCB fan based in Washington, USA tweeted to say “This is such a great idea. Wanted access to programmes in USA and now I can without having to pay for mail”.

“We are really pleased to be working with Tablish on this exciting development for Matchday,” Cherries head of media and communications Max Fitzgerald said.

“We are constantly looking at ways of improving the programme and hopefully this latest step will help supporters from all around the world enjoy it.”

Tablish Director Andy Anderson added  “On reaching the Premier league demand for tickets is without doubt going to be high so this allows people who can’t get to the game the chance to be part of the matchday experience.”

More details, including how to download issues and prices, will be confirmed on afcb.co.uk closer to the start of the season.